Where Do Squirrels Sleep?

Have you ever found yourself marveling at the glory of what we call the indoors? It's so comfortable - there's climate control, soft surfaces, and protection from the elements. If you've ever caught yourself thinking about it a little more and going a little further, you might have even started asking yourself the question, 'What do animals do for shelter?' Your mind might even shift to the thought of a squirrel hunched over an acorn on a nice, warm day. But you only ever see the squirrel on beautiful days! Where then does this small creature find refuge from the elements and predators, and where do squirrels get their much needed shut-eye after a long day? Where do squirrels sleep?

Most animals require a safe place they can use for shelter, safety, and raising their young, and different animals can use very different kinds of shelters. For squirrels, their happy hovels consist of either ground holes, dens, or drays. There are nuances between these different structures, the types of squirrels that use them, and the circumstances under which one type of nest is used over another.

It’s important to note, first of all, that different types of squirrels nest differently. The squirrel family consists of tree squirrels, ground squirrels , and flying squirrels, but also contains chipmunks, marmots, and prairie dogs. However, for the sake of this article we’ll stick with those first three types mentioned because they’re typically what most people think of when they hear ‘squirrel’.

Tree squirrels and flying squirrels live mostly among trees, while ground squirrels typically live in burrows in the ground or among rocks. The Eastern gray squirrel of North America, the red squirrel of Eurasia, and the North American fox squirrel are considered to be the most common and well known varieties of tree squirrels, and share similar nesting habits across the continents.

An Overview of Squirrel Nests

All squirrels nest within something. Whether it’s in the ground or in a tree, the common shelter for squirrels to create for themselves and for their young are nests. The variation between these nests is dependent upon the type of squirrel, the geographic location, and the season or environment. 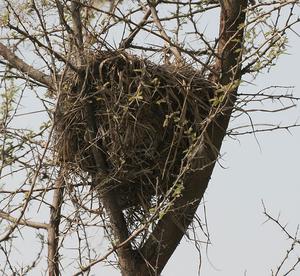 For tree squirrels and flying squirrels, the nest consists of dens or drays. A den is created in the side of a tree and is typically constructed using moss and leaves for bedding. Dens can be built into abandoned woodpecker holes or the natural cavities of a tree. Because a den only needs to be covered on the portion facing outwards, they naturally offer squirrels better shelter and protection from wind and precipitation. For these reasons most species of tree squirrel prefer to use dens during the winter months. If however there are a shortage of natural dens in a certain area, leaf nests (otherwise known as drays) become more common.

A dray is a nest that is built in the branches of a tree and consists of leaves and twigs arranged as needed. A dray usually serves as a place for squirrels to seek shelter during warmer summer months while also providing a safe place to raise babies. However, drays can also be used by squirrels during the winter months as well. For a dray to provide shelter and warmth during these harsher months, squirrels will harden and thicken their drays by adding more layers of leaves, twigs, and moss. If you ever find a baby squirrel look up and you may see the nest.

But what about ground squirrels? What do their nests look like? Similar to a tree den, ground squirrels utilize dens as well, although they’re underground – hence the name ‘ground’ squirrels. If these critters are local to your area, you’ll definitely be familiar with them and will probably easily understand the difference between them and their tree-dwelling brethren. While a tree squirrel will run straight towards a tree if you try to approach it, a ground squirrel is instead going to sprint for his underground den in the same situation. 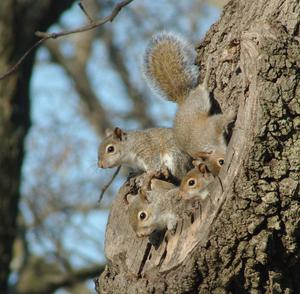 As you might imagine, there’s a lot that goes into the construction of a home, even for woodland creatures! It isn’t as simple as slapping together a few sticks and twigs and calling it home-sweet-home, and the process is reported to take around five to six hours for an adult squirrel to build a complete nest.

Beyond fashioning a comfortable, safe abode, the location of a dray is of vital importance in order to provide ample support for it as well. Most nests are built at least 20 feet up in the air, and the foundation needs to be sturdy to hold a whole squirrel family during nights or long periods of inactivity. The best locations for drays are either close to a grapevine, close to the tree trunk, on a strong limb, or in a spot where several small branches spread out from a single larger one. Squirrels naturally understand this, and generally pick spots that will provide a good amount of support. Have you ever seen a squirrel nest fall from a tree, or even spot one that had already fallen and was laying on the ground? Probably not - they’re craftier than they look!

The foundation of a dray consists of woven twigs with moss and leaves placed on top and flattened to form the base. A spherical shell of twigs similar to the foundation is woven around the base, and is then lined with more leaves, moss, and twigs to provide insulation and protection. Depending on the weather and the season, this outer lining may be made thinner or thicker to provide more or less insulation. Once the outside of the nest is complete, the inside is lined with soft grass, more leaves and moss, and even the mother squirrel’s own fur to provide a comfortable place to sleep and care for delicate, bare-skinned newborns. As for the size of these drays, they usually span up to two feet in width and one foot in height. 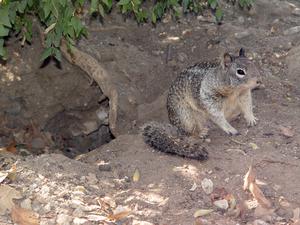 As for ground squirrel dens, they simply dig and burrow until they’re content with their underground lairs. Once again, the location of the ground squirrel’s den is of paramount importance. Popular places include sloped ground where flooding is less likely to occur, as well as under rocks, logs, or any other natural structures that can prevent disturbances and danger from other digging predators.

Ground squirrels also make it a priority to have many different escape routes and many different entrance and exit holes. This can lead to an intricate underground system of tunnels, particularly where there are large populations of ground squirrels. To give an idea of the size of these dens, the average size of a ground squirrel hole is four inches in diameter, while tunnels and burrows are usually no greater than three feet in depth.

How About a Vacation Home?

Squirrels don’t typically build only one nest, either. It’s popular for tree squirrels to build second and even third nests, and advantageous for survival as well. These extra nests can almost be thought of as safe houses - places where a squirrel who is out and about collecting food during the day can retreat to quickly if being tracked by a predator or caught in bad weather. Animals, and especially squirrels, might be smarter than you think!

These extra nests aren’t always as finely crafted as the home base might be though. They’ll typically consist of twig platforms piled loosely with leaves and tree bark. Sometimes tree squirrels may even use abandoned birds nests as resting places as well.

Squirrels are diurnal, which means they’re active during the day and get their sleep at night. During the light hours, squirrels will typically forage for food and water. A balanced diet for the small woodland creature will typically consist of small nuts and seeds, pinecones, and acorns . But as the light begins to fade, squirrels will usually find themselves back to their nests to either care for their young, to rest during the day, or to sleep at night.

But squirrels don’t only sleep at night. During different seasons, ground squirrels sometimes hibernate or estivate in their nests. Hibernation consists of a long period of inactivity and a deep sleep during winter months, while estivation consists of the same thing, only in the hotter summer months. To prepare for both of these yearly events, ground squirrels will fatten themselves up and build onto their nests as needed. 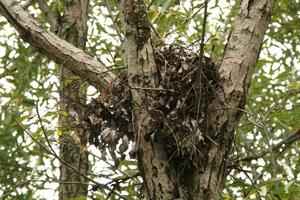 Depending on the location, ground squirrels are known to hibernate in their dens during cold winter months for around five months of the year. Hibernation allows animals to lower their body temperatures to just a few degrees warmer than outside temperatures in order to consume less energy. Their heart rate and breathing slows during this long seasonal sleep, and they typically only wake for 12 to 20 hours per week.

However, unlike ground squirrels, tree squirrels don’t hibernate. They typically build extremely warm, durable dens to last them through cold winters. By building a den as opposed to a thick winter dray, studies have shown that squirrels use less energy in maintaining their body temperatures as well during these colder months.

Like hibernation, estivation is another way for animals to be resourceful and safe for extreme weather conditions. You could think of estivation as the opposite of hibernation - it happens during the warm summer months, or periods of drought or high temperatures. Once again, similar to hibernating, an estivating squirrel will stay inactive during this period of time in order to adapt and survive the conditions of its physical environment.

Ground squirrels will typically estivate for around two to three months out of the year by accumulating body fat and blockading their nests with packed dirt. Additionally, adult ground squirrels are typically the only ones to estivate throughout these warmer months.

A Night in the Life of a Squirrel

So the next time you find yourself out for a walk or a hike in a wooded area, hopefully you’ll no longer be so perplexed by the question, ‘where do squirrels sleep?’ Instead, you can focus your energy and your observation on your newfound knowledge. If you look closely at the tops of trees and see a large ball of leaves, or keenly enough at the small holes that line a pock-marked forest floor, you’ll know that these are the humble homes of different species of squirrels.

Not all animals are fortunate enough to enjoy a memory foam mattress, but in it’s ingenuity and cleverness, nature provides for all animals. On those cold winter nights, you might find some comfort in knowing that the happy squirrels from a few months earlier aren’t freezing to death, but instead are cozying up in a nice, warm spot together.